Geraldine is a five-time Emmy award-winning journalist and documentary filmmaker. She is currently an executive producer with CNN’s original program development team and the vice president of diversity and inclusion for CNN Worldwide. Prior to that, she served as the executiv e producer of the highly acclaimed CNN documentary series In America. She has also worked at NBC News, MSNBC, ABC News and CBC Radio.

In addition to her Emmy Awards, she’s won an Alfred I. DuPont Award, two Peabody Awards, two RTNDA-Unity Awards, two National Association of Black Journalists First Place Documentary Awards and more. As a sarcoma cancer survivor herself, she is in a unique position to tell James Ragan’s story. “I was told that I had six months to live,” she says. “Almost 10 years later the doctors still don’t know exactly why I survived. There’s no cure for this cancer. I got lucky. So, now my purpose in life is to help raise awareness.”

Jamila is a two-time Emmy Award nominee and an independent documentary filmmaker, video director, and journalist. Some of her awards include three prestigious Webby Awards, a RFK Journalism 1st Prize in Domestic Television Broadcast, the CINE Golden Eagle and the OMMA Awards for Best Medical Animation Series.

For 14 years, Jamila has been the executive producer and creative director of Paksima Productions, her own production company. She has produced a series of short commercial films in China, Columbia, Argentina and the United States for Janssen Pharmaceuticals and Johnson & Johnson as well as independent documentary films in Iran and South Africa for PBS. “Most of us take a year for granted. We remain encouraged that our documentary will be a vehicle of influence and will, in a meaningful way, remind viewers of the urgency and need for better treatment options for all childhood cancers.”

Christopher is a Connecticut-based location photographer specializing in dramatic environmental portraits and dynamic adventure sports imagery for advertising, editorial and corporate clients. Growing up on the tail end of Cold War, his childhood was spent digging underground fallout shelters. This later developed into a passion for cave exploration, both domestically and internationally, and for investigating the often overlooked subterranean environments beneath cities. It was his efforts to document these spaces that ignited his drive to create unique imagery and led him to a career in photography. Whether a personal or a client project, his years of experience creating compelling images in adverse conditions allow him to maximize the potential of a shoot regardless of circumstances.

Steve is an experienced filmmaker, videographer and editor. Working in movies, commercials, documentaries and corporate video production, some of his clients include The Walt Disney Company, Showtime, the US Army, Glaxo, and the AARP. Steve and Jamila have worked a creative team for seven years. Steve has helped create and complete campaigns for Janssen, Johnson & Johnson, Sanofi Pasteur, BabyCenter.com and other healthcare clients. Steve has a truly unique combination of deep technical expertise and the eye of a gifted visual artist who captures exquisite images while crafting compelling visual stories.

Dita has over 14 years of international media experience, writing for newspapers, magazines, and publications in her native Latvia, Spain, and the U.S., as well as working as a producer, assistant director, script supervisor, and editor on more than 50 documentary and narrative films and commercials. Some of the films that Dita has worked on have won the Best Short Film at Slamdance, nominated for the Short Film Grand Jury award at Sundance, included in the Sundance Institute Screenwriters Lab, and featured on PBS FutureStates series. Her fluent knowledge of Latvian, Russian, Spanish and English and extensive leisure and professional travel experiences open up many doors to personal stories and unique insights into local cultures.

Haimy is a multimedia storyteller who uses film, photography and journalism to tell compelling and character driven stories. With a BA in Sociology and an MA in International Affairs, Haimy’s digital works aim to explore broad and nuanced social issues on both local and international scales. Originally from East Africa, Haimy has traveled to and participated in projects in Brazil, Ethiopia, Haiti and domestically in the U.S.

Haimy is currently a producer with Great Big Story.

Amy works with the Until 20 team to promote this inspirational story and raise awareness for childhood cancer through community and educational screenings. Her company Slingshot Films amplifies distribution for independent films through impact marketing, community engagement, strategic partnerships and social media. Prior to starting Slingshot Films, Amy worked as an independent producer and SVP of Production/Development of Miramax Films. Her films have played at major film festivals, including Sundance, Toronto, Venice and Tribeca Film Festivals and received critical success, earning eight Academy Award nominations and two Oscar wins. 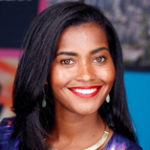 Nicole Ellis is proud Texan, a journalist and documentary filmmaker covering international affairs, human rights, travel, the arts, and culture. She holds a BA in Anthropology and Human Rights, and a MS in Journalism & Documentary Filmmaking, both from Columbia University. Before joining Until 20 she directed, shot, and edited Blind Date an independent documentary that follows three blind New Yorkers on their quests for love and long-lasting partnerships in the digital age.